Billie Eilish Pranks the Fandom and It's Hilarious

Saturday August 3rd began with a new addition to Billie Eilish's Instagram story. It was a snap of herself on a large billboard in New York City.  All seemed calm and fair throughout Instagram land and just like normal loving fans do, I grabbed my own screenshot and posted to my gram stating how proud I was of her.

On with my day, I spent the morning running errands and getting in that Saturday car wash.  Walking into to my boutique later than normal, I spent what hours I had doing some some creative work before meeting up with my girlfriend Wilma at 4:30pm. We were set to head out to Marina Del Rey, California to see a live summer concert with Kenner born Jon Batiste. We arrived, found our spot on the grassy hill right under the sun whose rays made the Marina Harbor sparkle like diamonds. The concert was wonderfully beautiful and the night was full. I even had my opportunity to dance with Jon Batiste when he brought the New Orleans style parade through the crowd.

It was not until I got home that night, prepared for bed and laid down to check my Instagram that I realized something strange had taken place in the IG universe. Like I do nearly every night, I check out new Billie tags mostly searching for new photos, fan art, and the funniest memes that causes me to laugh myself to sleep. This time I came across a post that stated something interesting about a photo that was "accidentally" posted in Zoe Donahoe's Instagram story, one of Billie's best friends. The fan account urged people to stop reposting the photo because Zoe deleted it for a reason. I became concerned leaving a comment asking what the heck happened? Is Billie okay? The response was, "We don't know".

After doing a little bit of digging I saw many posts and commentary about a photo of Billie that Zoe posted in her IG story that was possibly allegedly supposed to go to Zoe's close friends stories and not her public stories. However, after some minutes it was said to have been deleted. However, it only takes seconds for millions of people to grab a screenshot then hit the ground running.  From there I learned that the fandom went to work hard reporting the photo and getting "fake" fan accounts canceled that were posting the photo. They encouraged each other to post positive things like the photos of Billie I ran across that simply said "I love you so much" or "we love your so much". Even Zoe had inspired posts that said "Zoe it's not your fault". Someone even created a fake story insert that made it look like Billie posted a black screen saying "who's gonna start a gofundme for Zoe's funeral?". There was a fan account I ran across that was fairly new with only 7 posts, 4 followers, and they were following a little over 100 people. It seemed to me, and based off of other comments, people were starting new fan accounts that day trying to get follows and capitalize from this one photo. Fortunately, by the time I got to the Billie tags that night it was around 11pm and the photo itself had nearly disappeared. I figured the situation was mostly clearing up until I scrolled and ran right into it. Billie was in swimwear with a Playboy coverup and that is all I am going to say about it, nor will I include it in this article. Baby doll is cute though and full of fire.

So at least I had the opportunity to report at least one photo. What was so funny was that by the time it was midnight, at least in California, Billie posted an all new IG story. It began with this photo that included a revolving troll emoji. The original photo that was posted was completely from behind without her head turned. Here, she displays a sneaky smirk that had all of the fandom throwing their hands up yelling "She pranked us again!" 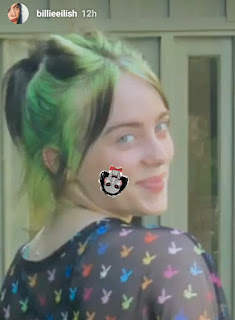 Swiping to the left there was a photo of her with a big cheesy grin. 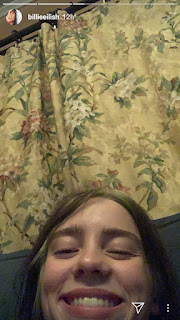 The third photo was of her and Zoe chilling in a room with big grins on their faces. 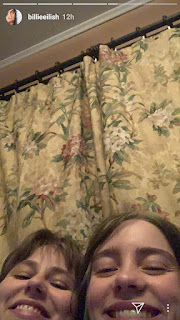 For just a few moments Billie allowed the fandom to take it all in. Within seconds these photos were screenshot and posts and clown memes were going up like mad. Then finally Billie added to the story by writing a white screen message that said: 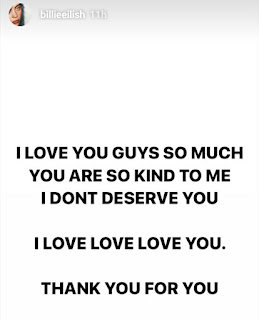 See, Billie and Zoe conspired to post the photo on Zoe's IG story but only for a few minutes before Zoe deleted everything. Majority of the fandom responded with laughter and returned 'I love you(s)' and 'I love you more(s)', and of course immediately posting the bikini photos again of which Billie herself hearted. I know I was giggling so hard it was not even funny. And this was true for some of the fandom who commented that they felt embarrassed, like clowns, or hurt that she would prank them like this and was already making plans to get revenge. From one post I ran across, all the work the fandom put in that day accounted for over 700,000 photos and accounts being reported and canceled. Hmm, I wonder what Instagram thinks of all of this.

Overall, the way I look at the the whole ball game is Billie, as an artist can simply go about her day knowing she has fans but not really worried about playing in the fanbox (yeah I just made that up) with them. She could be totally professional and only do what's latest and greatest in social media marketing, but she and Zoe literally took the time to troll the fandom all day to see what everyone would do and I believe in the end she knows that the fandom, we, I, truly love her, cares about her and wants to protect her, sword and armor. However, she will be 18 soon and of course other ages thereafter which means she will continue to do what she is comfortable doing when ever she is ready to do it and sometimes that will mean a photo or two of her not so fully clothed, and also us just letting her do what she wants.

Truth be told, as far as the skit itself, it is not anything to take seriously as some fans have. However, as a Billie fan who is 30+ I would only be concerned about the stupidity of mainstream media and the photo getting in the wrong hands and possibly media manipulators coming for her. Next thing you know her ass will be all over the tabloids, literally. But hey, perhaps that will never happen and if it does, and she does not mind her bum being splattered next to O Magazine and packages of bubblegum at the grocery checkout, we will just have to remember what the Baby says, "One day I will die and non of this will matter".

As far as the general demographic of the fandom which is from age 0 to 19 they are very impressionable and are not thinking this way when still posting the photo. I do spend time commenting and talking with some of the fan accounts without being too serious. I am just hoping to bring balance really. Truth be told on IG as well as You Tube many of Billie's older fans who are 30+, I sense feel bad that they are old but love her. Well, I am here to say, guys calm down. The older fans relate to those wonderful Billie lectures from interviews and if you are not overly adulting then you can get down and laugh at the pranks too which I believe Billie would rather you do no matter your age.

To shut it all down, Billie and Zoe were having lots of fun on Saturday August 3rd. It was quite a wild ride and if I had caught it form the beginning I would have been reporting photos just the same, I think.