Billie Eilish vs The Fandom | Let the Prank Wars Begin! Will They Continue?

"Name another artist that gets into prank wars with her stans- I'll wait..." were the words of @bilsdemons, one of many Billie Eilish fan accounts. My response?

And it's true. Billie Eilish is lucky to be seventeen right now with a fan base of mostly little ladies of her same generation. Not only that. She is unique in the fact that she has somehow gone from playing with friends throughout her Highland Park and surrounding Los Angeles neighborhoods to playing with "friends" around the world. I call it playing in the Fanbox together. While she is already becoming a case study for other record labels outside of her own, she has made a connection with Stans other artists have not come close to making. Honestly, it's unbelievably authentic and you know what, they are all watching and taking notes.

We already know about her infamous hugs, that beautiful angelic voice, how she makes everyone cry during live performances, and also probably while sitting in their cars alone under the moonlight sky blasting "I love You" or "When the Party's Over". We also know how wild, crazy, and funny she is having the ability to make everyone feel like they are her sister, brother, or best friend. These days, I find it amazing that you can literally DM a "celebrity", like their photos, leave comments and actually get responses back within seconds or hours. Interaction is so immediate that the bridge between stardom and normal living is so much of a short distance it is as if we are actually living life together with the famous and not separate from them. When I was a little girl, you wrote a fan letter, usually by hand, folded it, licked the envelop, grabbed a stamp, actually drove to the post office to mail it off just to receive an autographed photo some time later. That was it. Billie on the other hand, like many artists, trolls the social media platforms, liking post, sharing stories and even commenting every now and then. Supporters have even shown up to meet and greets only to find out Baby Bil knows who they are already from looking through their grams. The girl is really paying attention and they are amazed! On the flip side she also manages to conjure up a scheme or two and the fandom LOVES IT, the fact that she is even thinking about something to get them good with.

This past Saturday she pranked all of us which you can read here. But little did she know that two high profile fan accounts was plotting a comeback behind her internet back. I discovered everything that went down today at 11am after pulling into a parking space on campus. I looked at my phone and saw a live stream that @mini.billie.eilish posted. When I read the caption I went into hysterics! My first thought was, "Oh man! I missed baby Billie going live for the first time in like a year and a half!" Unfortunately, it was not Billie. It was the genius fan accounts @beanieeilish and @avocado.eyes.

With @avocado.eyes's idea @beanieeilish went to work. Here's is how she pulled the off the fake live. 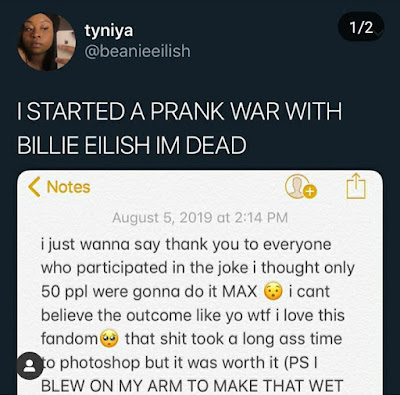 Tyniya who manages the account @beanieeilish spent hours photoshopping a black screen to look exactly like Billie's Instagram page. (Man the kids are smart) She went live Sunday night thinking that only 50 people would join. There ended up being over 24,000 instagrammers viewing the fake live of Billie sleeping and farting. That's right, farting. Viewers figured Bille went live but did not know she was live and fell asleep. All you heard was snoring and farting. (Guys, I'm STILL laughing as I write this.) 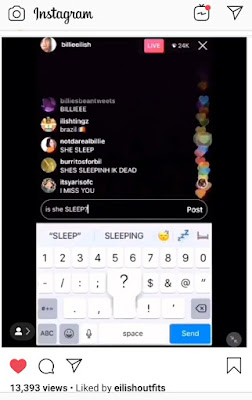 The comments were to die for. People were so confused. They asked, "Is she sleep?", "Is she dead?" (Clearly dead people don't snore). When the fart happened all hell broke loose, crying emojis and LMFAO left and right spewed from keyboards. Just when I thought the prankster was unprankable. Come Monday, upon waking up, Billie discovered Saturday's prank had been returned and it was good! Baby girl then took to her IG stories and sent out, shall I say, a "humbling" message. 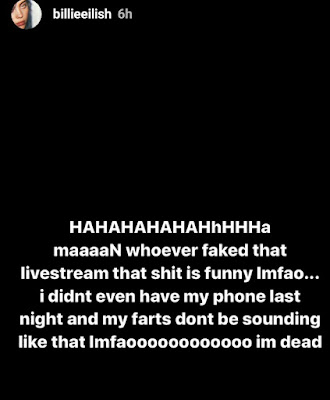 In the next two swipe lefts was a video of her shaking her head for a few seconds, rolling her yes, and finding humor in it all. 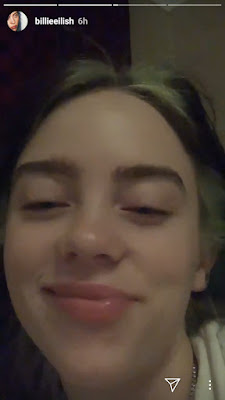 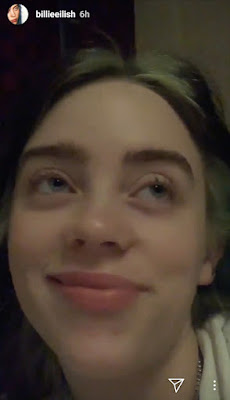 She goes on to say: "Yall got me back. It's okay, I deserve it, but I'm gonna get you back real quick".(with a sly smile). "Don't you worry about it. Ta hee heeeeee!" 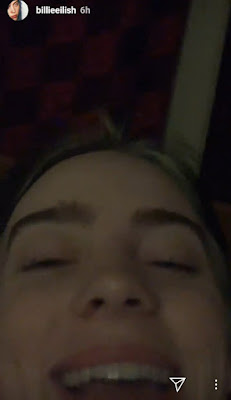 Then: "You really think my farts are weak like that? Hahaha! That's ain't me. Mine sound like a fucking bomb. Ahahaa!"

And so the prank wars begin. Or do they? Just a couple of hours ago I went back to Baby Bil's story and it was all deleted. Perhaps because suddenly seven video appeared on Youtube with the caption "Billie Eilish Farts in Sleep on Instagram Live". Oh no. In runs the team. But I am only speculating here. However, we are reminded that she is now a "professional artist". Boundaries and filters must be put in place. Or do they really NEED to be? I don't have the answers because I am not there working behind the scenes.

Currently, Stans are plotting another scheme to get Billie good. Will it go down and will Billie Bong actually come back strong, if at all? Generally, I think the pranking will all die down before it gets too out of hand. One Stan suggested that we organize a monthly prank for one day only. Phew! That's quite a commitment for a busy performer like Billie. I am glad everyone is just having fun in the Fanbox for now, considering I have not had this much fun since attending her concert at the Shrine in July. I guess we will have to wait and see what takes places in the next week or so.

The prank wars will not continue. Unfortunately a group of people who call themselves fans began threatening Billie and her personal space. I will not mention all that was spoken of because I do not believe in putting that energy out there. Billie then posted a new story begging and pleading with the fandom to let it all go. The fandom won and she wanted to call a truce. (handshake emoji inserted). She said she would not return the prank, that she loved everyone and that she wanted to move on to something else. Overall, the weekend was fun and we had some good laughs.